HISTORY OF THE BERLIN AIRLIFT

The Genesis of both the Berlin Airlift and the subsequent 40 year Cold War can be placed directly at the meeting of the Allied Leaders at Yalta in January 1945. Soviet Premier Joseph Stalin informed President Roosevelt and England’s Prime Minister Winston Churchill that he was moving the German-Polish border 200 miles to the west. This forced 12 million ethnic Germans from their homes and they flooded west into Germany when the war ended in May of that year. Because Russia was our wartime ally and Poland was already under their rule, neither the United States or England were in a military position to stop this land grab.

At that same meeting it was agreed that a defeated Germany would be divided into four parts by the allied powers with each controlling both the economy and the governing of their respective zones that divided the whole of Germany. The defeated capital “Berlin” was located deep inside the Soviet zone and would also be divided into four parts called sectors. This quadripartite governing would be by mutual decisions at monthly meetings.

The battle for Berlin lasted 17 days ending on May 2nd. The Soviet Army suffered over 80,000 dead and over 300,000 wounded. The remnants of the Nazi war machine were destroyed and over 50% of a once beautiful city was in ruins. Despite agreements for allied occupation the Russians refused to allow the French, British and Americans into Berlin until July.

During May and June the Russians removed anything that might be useful to rebuild mother Russian. Over 1000 railroad cars were loaded with anything they could remove. This was part of the retribution they demanded from Germany.

During these two months the remaining Berliners, mostly women were brutally treated. Anyone on the streets that refused to give up a watch, or a bicycle could be shot. Rape was rampant in the city and over 10% of the women committed suicide. Later over 100,000 abortions were reported. The Russians may have captured the city but they lost any hope of support from Berliners.

The remainder of 1945 was relatively smooth with a co-operative spirit between the allies and the Russians. Most of Europe was still cleaning up from the war. 1946 and 47 were troubling years around the world, the middle east was in turmoil, China, Greece, India and Czechoslovakia were in Civil war.

By 1948 the Russians had taken over a series of satellite nations between Germany and Russia, – Poland, Czechoslovakia, Hungary, Lithuania, Latvia, and the communists had gained political strength in France, Spain and Italy. Thwarting their efforts for the domination of Europe was a bastion of Freedom called West Berlin and West Germany. The world turmoil forced the United States of re-open the military draft less than three years after the end of WWII. Germany was the boiling point.

In February of 1948 the British, French and Americans agree to consolidate their zones in Berlin and call it West Berlin. In West Germany they agreed to form a single government. The Russians withdrew from any further meeting and the division of East and West was complete in all of Germany. A month later, in March, the first of the deliveries of food and equipment begin under the European Recovery plan called the “Marshall Plan”.

The response by the Soviets was to recall their leaders from Communist Germany and propose a plan to force the allies to leave Berlin. In April the Russians began having “technical problems” with the one road and the one rail line serving the ally’s access to Berlin. Several times allied troops faced Russians rifles as the harassment intensified. Only cool leadership prevented open conflict.

We had air access to Berlin by way of three air corridors, each was ten miles wide and to an altitude of 10,000 feet. A 20 mile round air controlled zone gave maneuvering room to land.

General Lucius Clay, The military Governor of Germany recognized that a strong economic Germany was the key element to rebuilding Europe. Because the Russians refused to supply any food to Germans in allied control these were being supported by British and American tax dollars. On June 18th he introduced the new Deutsche mark replacing the Reich mark. Almost overnight the once flourishing black market disappears and the regular stores became stocked with food and household goods.

With the consolidation of West Germany and West Berlin, plus the Marshall Plan and currency reform, the Soviets responded by land blockading West Berlin. By June 26th the Russians had totally blockaded the city, closed the roads and canals and tore up the railroad tracks. They would attempt to starve the 2.4 million West Berliners then instigate food riots and move their troops in claiming the allies could not control the people.

The Americans first plan was flying supply our Berlin garrisons of 25,000 soldiers. West Berlin was surrounded by over 250,000 Soviet troops. But a British commander, R. W. Waite had developed a plan to feed the total population using available aircraft. General Clay accepted it and made the decision on his own to start an airlift with the intention to buy time for diplomacy to solve the crisis. He went to Berlin’s Mayor Ernst Reuther and told him. Some of your people will be cold and some will be hungry by I’m not going into this unless I know Berliners will be supportive. The Mayor replied that the people of Berlin will do whatever is necessary”

Starting with less than 90 small C-47’s (2 ½ ton load) and two larger C-54’s with a 10 ton load they started the airlift which was named “Operation Vittles”. General Clay went to Washington and got approval for 50 more C-54’s. At this point in June 1948 only four people thought that an airlift would work; General Clay, President Truman, British Prime Minister Attlee and their Foreign Minister Earnest Bevin.

Our State Department and our Defense Department were in favor of letting Berlin fall to the Russians. President Truman said we will not let Berlin go. To insure the safety of the air lifters he ordered 90 B-29 bombers moved to England and Germany. Through diplomatic
channels he let Moscow know it would be bombed if they interfered with the airlifters.

Thus began the largest humanitarian airlift in history. As additional aircraft were made available the American Air Force in Germany had over 300 C-54 cargo aircraft and the Royal Air force had over 100. Soon they flying night and day with an aircraft landing in Berlin
every three minute. The need for 4500 ton a day was not met until late August but once achieved the airman never looked back.

Initially in June and July the airlift was a cowboy operation with tired airman flying aircraft needing maintenance and inspection. All of this changed on July 25 when General William Tunner arrived to command the airlift. Nicknamed “Willie the Whip” he demanded efficiency and revised almost every airlift procedure.

On July 28th of 1948 a C-47 crashed in Berlin killing the two crew members. When the wreckage was removed fresh flowers began to show up and every day for the past 65 year’s fresh flowers appear. This crash contradicted and disproved all the propaganda Berlins were being told by the communist newspapers and radio that the allies would abandon Berlin. Americans were willing to die to save Berlin.

Most airmen went onto a 12 hour work day, making 3 or 4 flights to Berlin. On arrival they were met by a weatherman and mobile flight operations and a mobile canteen with pretty Frauleins, Unloading time supervised by the army decreased to an average of 20 minutes and increased radar control provided better flying conditions. General Clay was an engineer and recognized that a third airport would be needed. We only had two, Tempelhof in the American zone and Gatow in the British. The French provided the land for a new airport named Tegel.

Construction of Tegel began with over 17,000 women in August. Working 12 hours a day for a hot meal and one Deutschmark the women got the same pay as the aircraft loaders. Flight operations began 90 days later. The runway required an asphalt plant with 10,000 55 gallon drums of asphalt, all flown into Tempelhof or Gatow and trucked to Tegel.

Statistically the cargo going into Berlin was 2/3 coal which was needed for the sewer, power, gas and water plants. Everything the city needed except water was flown in and measured for usage. If a bakery got X amount of flour it was expected to produce X amount of bread. All food was rationed with controlled distribution points throughout the city.

While the Americans flew in the coal the other I/3 of everything going into Berlin was flown by the Royal Air Force. They conducted a reverse airlift taking over 150,000 elderly, infirmed and children to the West to escape the hardships in the City. They flew a variety of aircraft
some of which were WWII bombers converted to cargo haulers. Some of these had dropped bombs on Berlin and now flew in liquid fuels with the same wartime crews. Americans had two bases in our western sector of Germany and the British had eight. While American crews concentrated on coal and flour the British flew in almost everything else.

The Russians counted on Old Man Winter and General Fog to stop the airlift. It did not. With new navigation aids the airlift continued round the clock all winter. Only one day October 29, were we able to land only one plane in Berlin…….the following day over 700.

Berlin Airlift Memorial TempelhoffBy March 1949 the blockade was proving useless. More goods were arriving by air than had arrived by rail, canal and road. Russia began to negotiate through the new United Nations in NY for an end to the crisis and the blockage was lifted on May 12th. Although the blockade ended, the airlift continued until the end of September to assure supplies in case the Russians renewed the blockade.

Airlift had proved to be an important physical and political tool. In 277,569 flights with an aircraft landing every 3 minutes air power had saved the city from communist domination and made Stalin admit defeat.

But Freedom is not free. 32 Americans and 39 British airlifters died in aircraft operations. In 1952 the Berlin government started the Berlin Airlift Gratitude Foundation and have looked after the financial needs of all the widows and descendants of those killed. There are students in colleges today on Airlift Gratitude scholarships.

Berlin is now the Capital of a free and economically sound nation, a strong partner of NATO and is the only European country that has fully repaid the United States for everything it received in the Marshall Plan.

Who can say what the world would be like had the untested and improvised airlift failed? Would 2.4 million people become subjected to slavery and brutality? Would Moscow’s power and influence extend to the English Channel? Would our world today be totally different? Thankfully because of the resolve of General Clay, President Truman, the Berliners and British and American armed forces, we will never know. 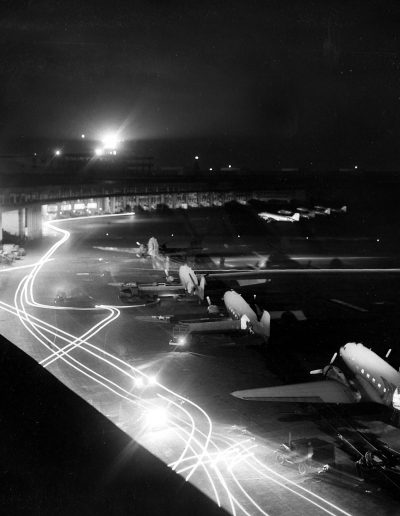 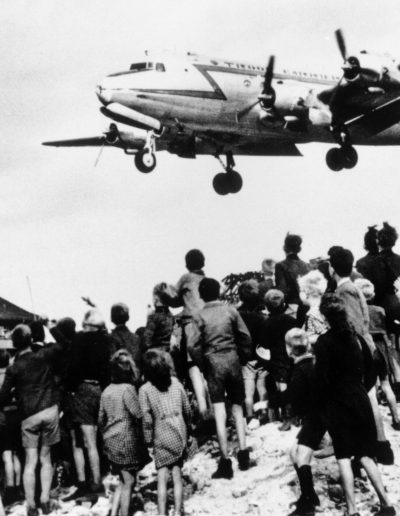 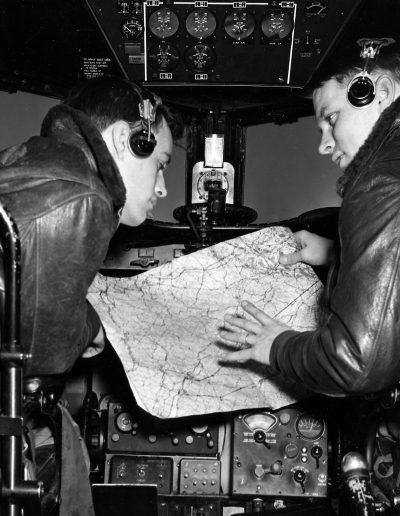 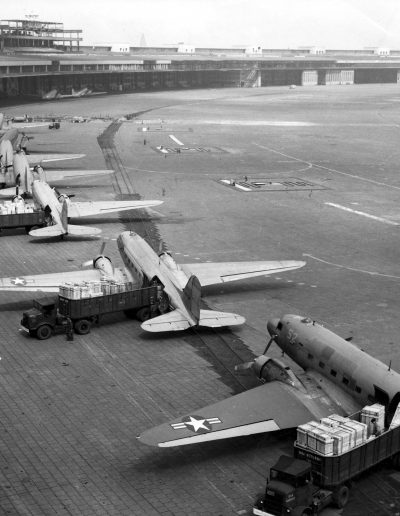 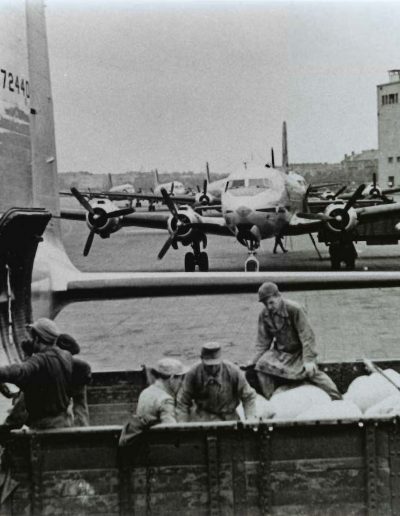 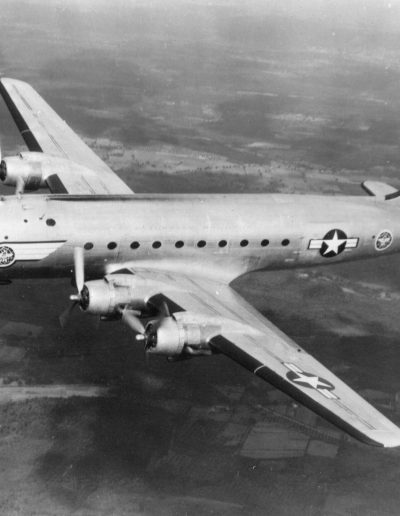 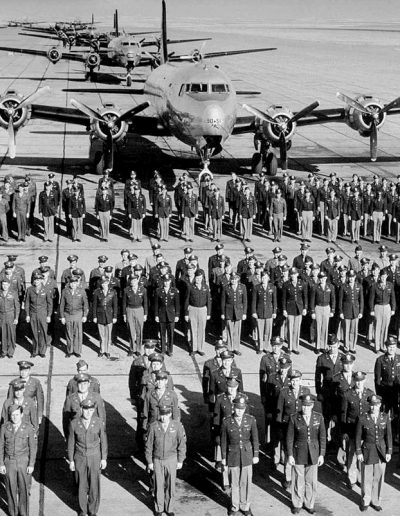 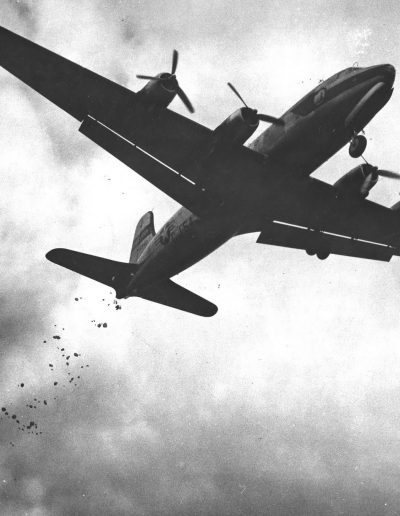 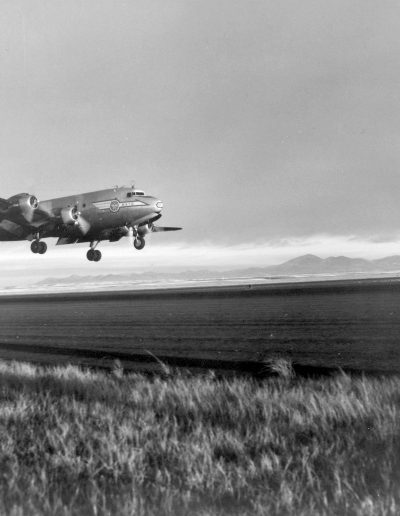 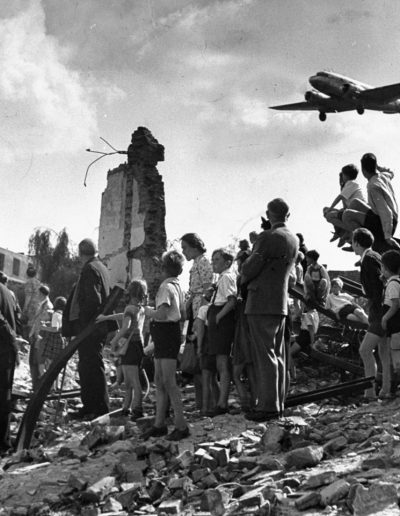 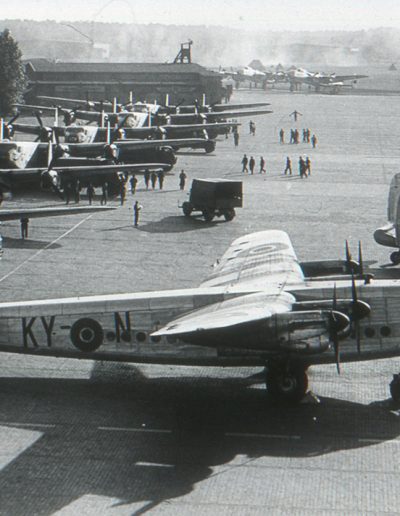 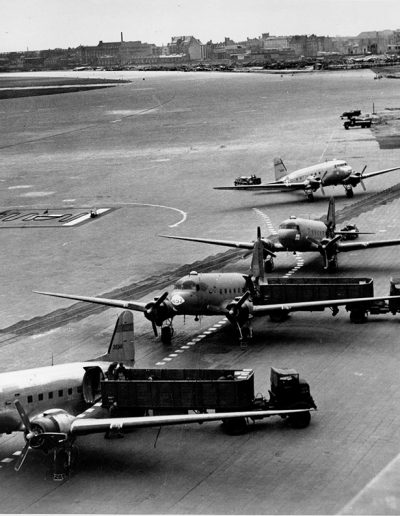 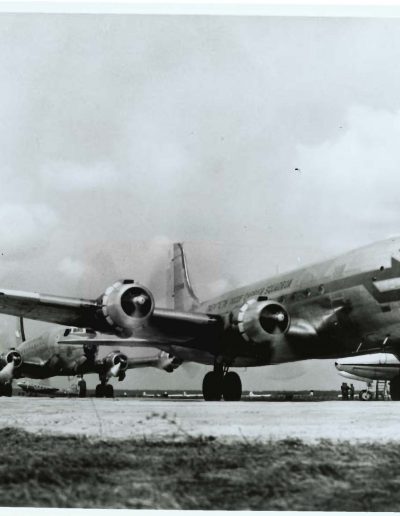 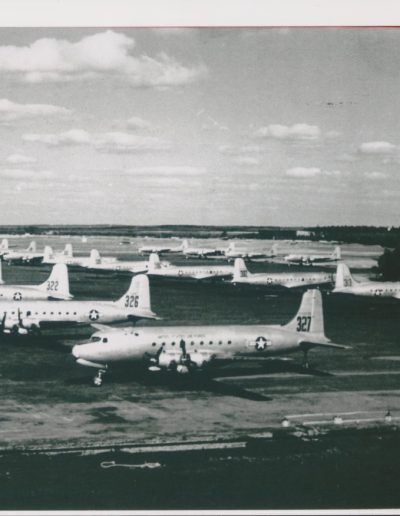 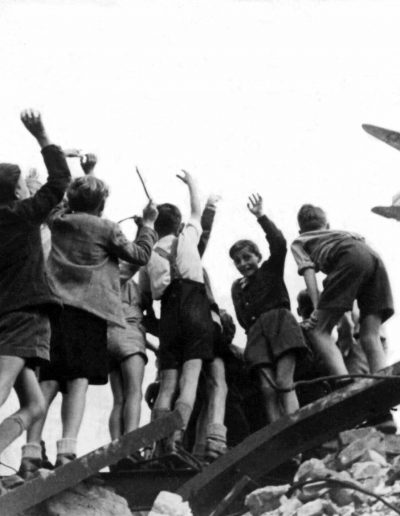 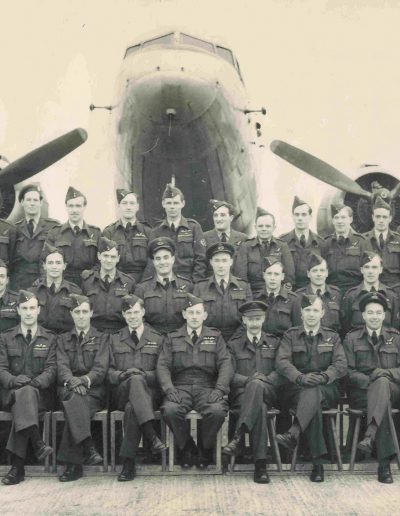 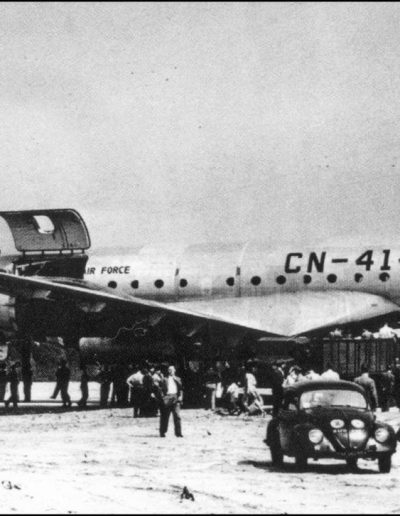 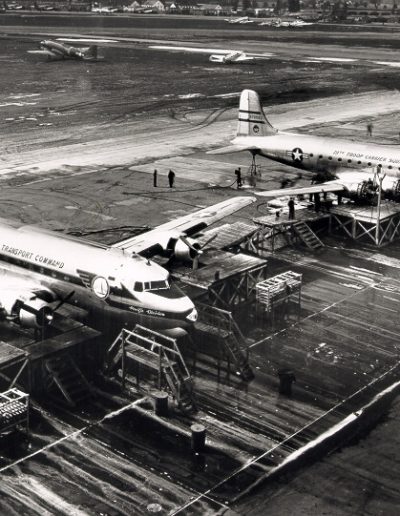 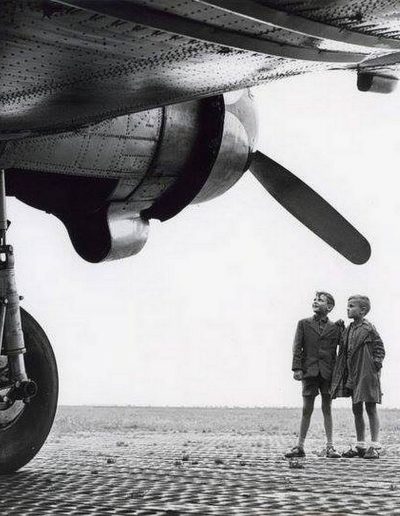 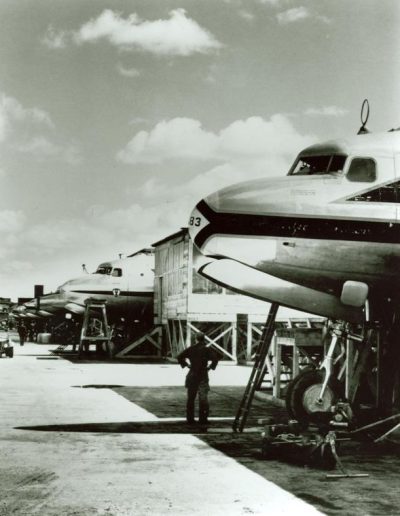